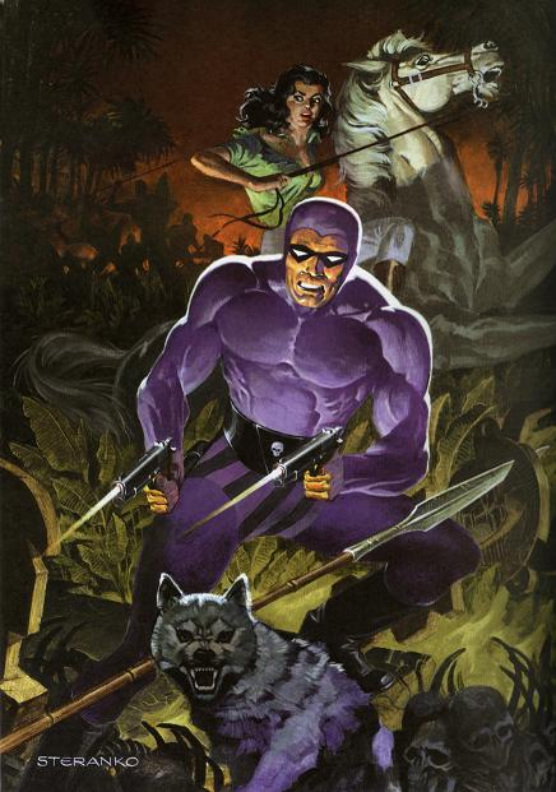 (The Phantom is copyright 2012 King Features / the hearst corp / artwork copyright James Steranko 2014)
(PLEASE BEAR WITH US WHILE WE BUILD THE JAMES STERANKO TRIBUTE PAGE, THANK YOU FOR YOUR PATIENCE.) James Steranko had an effect on my life at a very early age. I still remember the first image I ever saw, was the ad on the back of a coverless marvel comic at my grandparents home in Gulf Shores Al. The image was a Nick Fury pointing a pistol at the reader, with an ad for Strange tales with Doctor Strange. I was hooked! From that moment on I scoured all the second hand book stores searching for anything by this amazing artist, that did these amazing scenes with a newly revamped version of Sgt. Fury! As the years passed I was able to find more Steranko art in books, and eventually meet the legend himself one day!
The image of the Phantom you see here on the left is a fine example of  how Steranko has the ability to draw you into his worlds of action and adventure. You have everything here adventure, danger, and pure action! when I first embarked on the picto-stories project, Steranko's art was always on my mind. To me, Steranko's comic art always had a cinematic quality to it, constantly moving the reader to an eventual end, but always urging the reader on, making you not want to put the book down until the story had concluded. 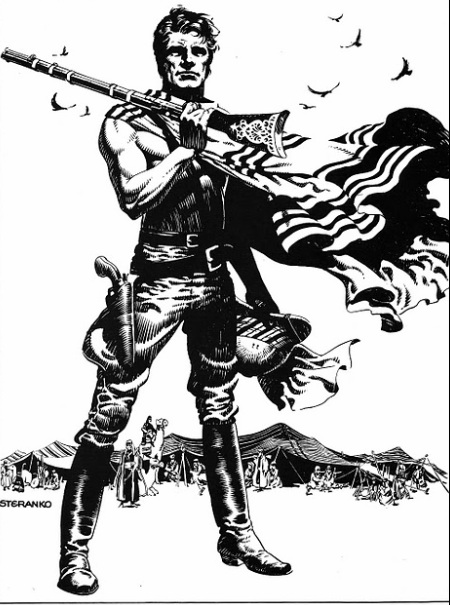 (El Borak is copyright the estate of Robert E. Howard / Lone star Fictioneer number 3, and James Steranko 2014)
.......Because growing up I had very little surplus cash to spend (which is not much different now as an adult), there were certain enigmatic books, such as Robert E. Howard's EL BORAK, serialized in the Lone Star Fictioneer #3 with Steranko art I could only wish for! I still do not have the book, now as an adult, but I did wind up with the images that were published poster size in Steranko's MEDIASCENE magazine. 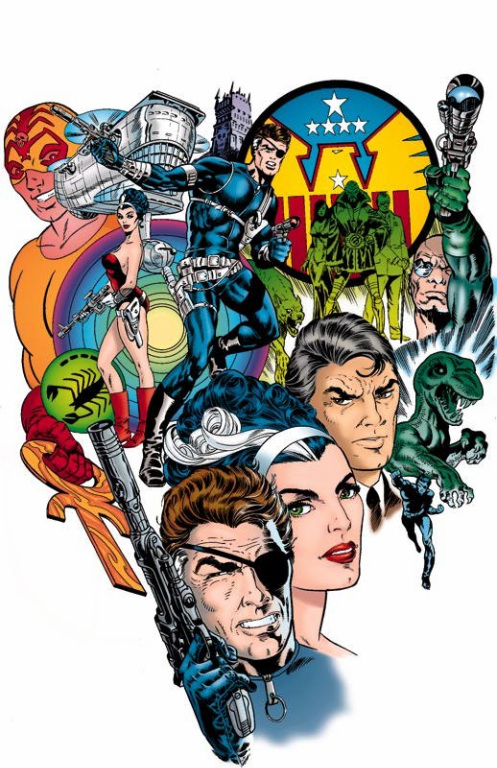 (Nick Fury, Agent Of S.H.I.E.L.D. is copyright Marvel Comics 2014, artwork James Steranko 2014)
Nick Fury has never been more brought to life in Marvel Comics history, than when James Steranko began working on the book. Almost immediately after his debut as artist in Strange Tales, the stories and all the characters started to be fleshed out. Non readers as well as regular readers were being drawn into the book, dazzled by this newcomer artist's new take on the character.
Steranko's vision of the spy world took on a life of it's own, as did his popularity on other titles he drew, and especially his eye catching covers he did for Marvel on various titles in the very early 1970's.
Had Steranko stayed with Marvel, there is no telling what the Master would have created for Nick Fury and his crew, but thankfully Steranko left behind a body of work on the series that to this day astounds new readers that are just now discovering the legend on the Nick Fury series by James Steranko in reprint format. 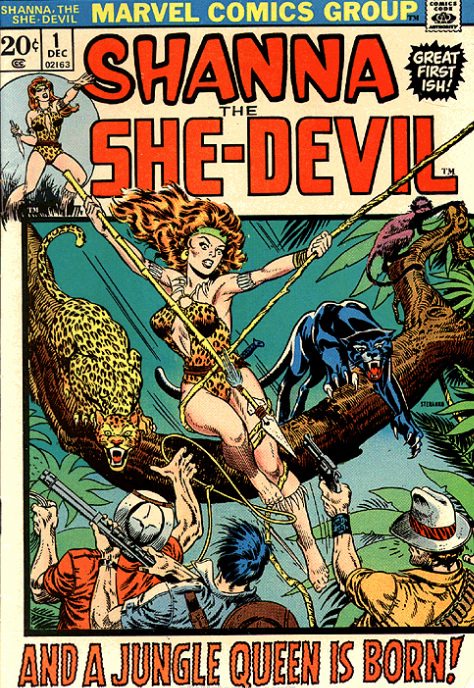 (Shanna The She-Devil is copyright Marvel Comics 2013, and artwork by James Steranko 2014)
.......When I was younger, I got into sooooooo much trouble for buying this comic book to your right, from Marvel Comics! I truly thought my mother would scalp me for buying this book, but thankfully it never happend! To me this is one of the most original, and beautiful covers that Steranko ever created while he was at Marvel. Once again, he was able to tell you a story, simply with one drawing, I remember it was a while before I ever actually read the book, because I had to hide it from my mom, but by simply looking at the cover I could imagine a story with my own imagination with the images provided on the cover.
Steranko's mastery of the human form in motion, and his use of expressing emotion through peoples hand gestures, as shown to the right, conveys everything you need to know about the story without ever reading it. Had I have just found the comic cover only, no telling how the story would have played out in my mind over the years before finding the whole book! 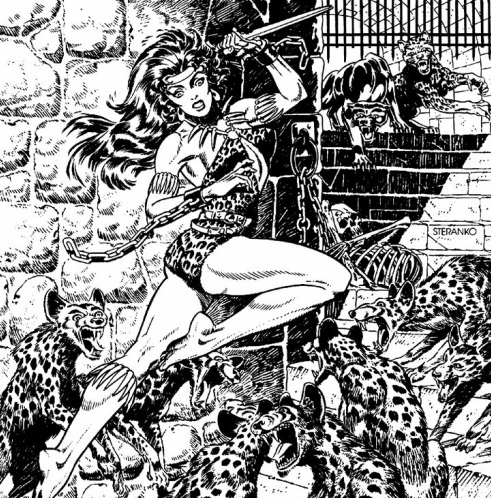 (Shanna The She-Devil is copyright Marvel Comics 2013, and artwork by James Steranko 2014)
Here to your left is an example of Shanna the she-devil issue #2 cover, in it's original inked form, before the color was added. Even when there is no color, Steranko's dynamic art shines through. If comic history had been different, it would have been interesting to see action /adventure and horror stories like the one's presented in the early black and white Marvel and Warren publications drawn by Steranko. The mood Steranko creates with his art pulls you into the panels, as well as his paintings, leaving you with an appetite for more! 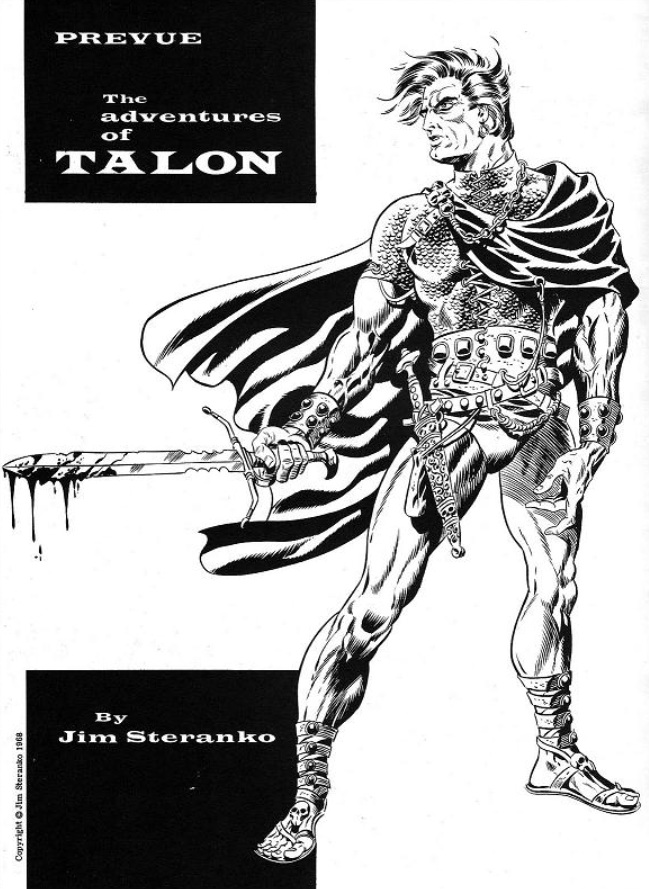 (Talon is copyright James Steranko 2014)
......Once again I as a youth had purchased one of those "forbidden" black and white magazines, and if memory serves right I think it was a Conan magazine, Savage Tales #2, or #3. It was filled with great art and stories, but most of all, I learned of Steranko's sensational new character TALON in an article with artwork of the sensational new character he had created.
I was instantly taken with the character, and even as a kid fashioned, and filed down a makeshift sword to pretend I was Talon going on fantastic adventures of my imagination.
The image to the right was on the first page of the article, and as you inspect closely the detail Steranko added to the clothing, belts, straps and weapons of Talon, it is a blueprint for an actual working outfit, and weaponry.
One day I hope we all get to see Mr. Steranko reveal the fantastic adventures of Talon to us, but for now we can only imagine the adventures of this amazing fantasy character! 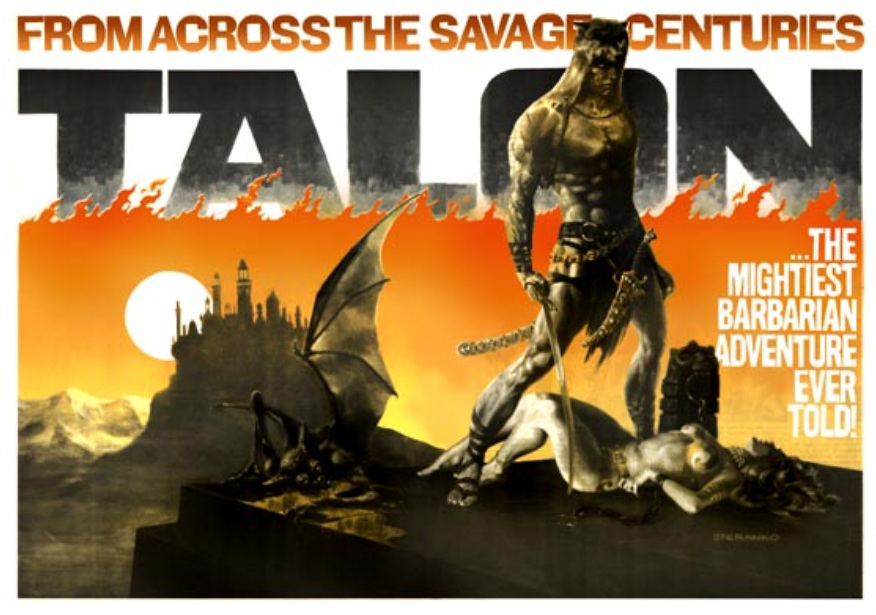